Today R Hari Kumar takes over as the new Chief of Naval Staff of India. On 9 November 2021, he was nominated by the government to take over as the next Chief of the Indian Navy. Earlier, the Chief of the Navy was Admiral Karambir Singh, who would retire on 30 November.

Admiral R Hari Kumar has been honored with guard of honour. 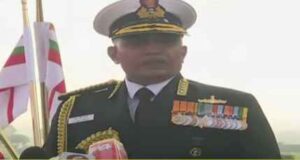 Admiral R Hari Kumar, who became the new Chief of Naval Staff, was honored with guard of honour. He took over the command of the Indian Navy on Tuesday. Admiral Hari Kumar was born on 12 April 1962 and was commissioned into the Indian Navy in 1983. He has served in many important positions in the last 39 years. He had commanded the Indian Navy’s aircraft carrier INS Viraat as well as INS Ranveer. He has also been awarded with many medals.