in this post i am discussing about Why You Should Apply To The U.S. Air Force Academy. well it’s a nice question and in this post you will definitely get the answer. 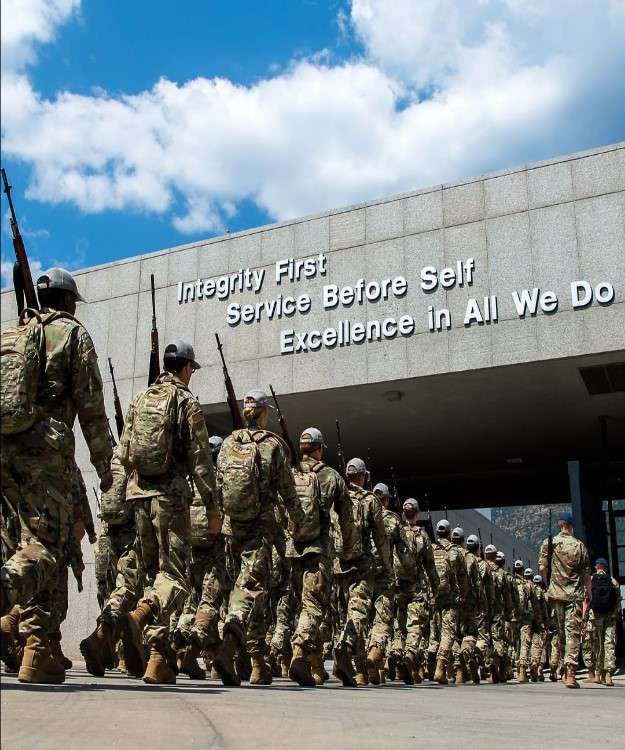 About The U.S. Air Force Academy

it’s essentially one of the most unique four-year college experiences in the world. it’s located in Colorado springs and upon graduation after your senior year you will commission as an officer in the U.S Air Force. now being a military academy it’s going to be physically challenging and the academics are pretty tough but at the same time i promise you it is incredibly rewarding at the academy you’re not going to get the typical college experience that most of your friends will probably have but at the same time what you will get is the chance to take advantage of some once in a lifetime opportunities.

Why You Should Join The U.S. Airforce Academy

here i am talking about my experience. i chose to go to the air force academy because not only did i want a  challenge but i wanted to do something different than most of the other kids i grew up with i wanted a school that would set me up for success later in life. A school where i wouldn’t have to worry about student loans or looking for a job when i graduated. i wanted to go to a school that would allow me to serve my country and i really really wanted to spend my entire freshman year getting yelled at but in all seriousness the air force academy’s benefits are ones that are still surprising me to this day and if you’re up for the challenge i really hope this blog encourages some of you all to apply.

so first up i want to talk about one of the most appealing benefits of attending the academy.  the cost of admission foryour entire four years will be completely covered your tuition room and board meals and many other admissions fees will be free. i mean technically it’s covered by taxpayer dollars which we all contribute to but come on it’s it’s basically free. on top of the free cost of admission the academy will also pay every single cadet a monthly stipend so you can actually have some spending money to go out and enjoy. Throughout your freshman year the stipend will be reduced to pay off some of the cost of your issued uniform items computer and so on but by the time you’re a junior and senior you’ll be making some pretty good money each month especially considering that everything you really need will be covered. now i should definitely add that the trade-off for receiving this free education is that upon graduation you will owe a minimum of five years active duty service in the air force. now should you choose to go to pilot training or one of another select few career fields. the commitment you owe will be longer depending on what job you select.

Set Up Your Success

now as i mentioned earlier the air force academy will pretty much set up every single cadet for success that’s because after you graduate you will be commissioned as a second lieutenant in the U.S Air Force. not only will you get a guaranteed job but it’s an opportunity to start leading other people as a young officer as well as an opportunity to serve your country and put you on a path to really make a difference. there are dozens of different career fields you can go into and once your senior year rolls around at the academy you will have the opportunity to put in your preferences for both what job you want and what base you’d like to be stationed. of course there’s no guarantee you’ll get what you want but the harder you work and better you perform throughout your four years will pay off when it comes time for your job selection.

How To Become Pilot

The air force academy is hands down one of the best places you can go to earn a pilot slot. the reason for that is that the academy hands out the largest number of pilot slots to cadets every single year when i graduated in 2018 over 400 pilot slots were awarded to my class and if we look back at the class of 2019 their class had more than 530 pilot slots given out so if you don’t see the trend right now it’s a great time to be a pilot in the air force.

statistically speaking the academy is going to be your best option to do just that now when i was in high school researching the air force academy as an option for where i wanted to go to college. i mean i was completely blown away by all of the crazy unique opportunities cadets had the chance to be a part of. now this was a huge reason i decided to apply and now as a grad looking back i can promise you that there will be no shortage of incredible experience you will get to take advantage of. so first off i want to talk about the summers because they are some of the most exciting times at the academy and each year there will be different options for what programs you can do.

after your freshman year you can sign up for either the basic freefall course which gives every single cadet five free fall parachute jumps or you can choose to fly gliders in the airmanship program as well i personally chose to go the jump route which they say is the only place in the world your very first jump is a hundred percent by yourself. let’s just say it was an insane experience but i’m not sure if i will ever willingly do something like that again. now after your sophomore year you will get sent on a program called ops air force which allows you to experience different active duty career fields at a real air force base. they send over a thousand cadets to bases all around the world and you will have the opportunity to shadow all different types of career fields and may even have the chance to strap into the back seat of a fighter jet or other military aircraft. now by the time your junior and senior years roll around if you’re interested you can apply for summer internships or even look at possibly spending a summer abroad or semester abroad at a foreign country’s military academy. in fact there are even options to do a semester exchange with both west point annapolis and the coast guard academy as well.

now i also want to mention one more quick thing that is pretty unique to the air force academy and that is the student-to-faculty ratio the air force academy ranks as one of the best in the nation with a student-to-faculty ratio of eight to one. the school also has 65% of its classes held with fewer than 20 students. now this is important because while the academics at the academy are tough having those smaller classrooms and teachers dedicated to giving you extra instruction whenever you need it, makes so much of a difference in terms of your education. now there were many long nights i had studying for tests and completing projects but having my instructors there to help all along the way was incredibly important. now in my opinion probably the number one reason for why the air force academy is such a special place is going to be the people because of how much time you spend working as a team alongside your class and your squadron the bonds and friendships you will make will seriously last a lifetime. throughout your freshman year you will essentially do everything with your squadron that consists of about 30 cadets in each class especially freshman year you will live eat, breathe, train, work out and study with your freshman class some of my best memories i had were that first year and i’ll never forget some of the crazy things we did and probably some of the things we shouldn’t have done as well.

now before we wrap things up i want to cover a few misconceptions i’ve heard about the academy to hopefully clear the air and let you know what you’re getting yourself into. so first off the academy is not purely a military school and what i mean by that is that we are not just constantly going around and being all military and strapped and serious i mean of course there are times for that but at the end of the day we’re all still college kids and you are allowed to have fun just like the other schools. the air force academy has a division one football team team, basketball team and about a million other intercollegiate sports teams and clubs that you can be a part of. i was actually on the mock trial team at the academy and got to travel all over the country to compete against other schools and of course i can’t go on without mentioning air force hockey it definitely gets pretty rowdy. now i’ve also heard people ask if you have any free time at the academy and the answer is yes. the campus itself is located in colorado springs and it’s just a quick drive off base when you’re an upperclassman to grab some food or hang out with your friends on the weekend to just get away, not to mention the fact that you’re just a few hours away from some of the best skiing in the country so if that’s your thing you’re going to be set .so last but not least if you’re wondering if you have to major in some sort of engineering or math or sciences field the answer is no. while the air force academy does have some of the best programs for these technical degrees that doesn’t mean you have to make it your focus . now you will spend your first two years taking a bunch of core classes that will introduce you to these subjects but when it comes time to declare a major you are free to choose any one of the academy’s 30 plus majors that include english, legal studies, behavioral science, management and economics.

so that about sums it up i mean obviously there’s no way i could possibly mention all of the reasons why you should apply to the air force academy but i hope i was able to spark some interest just like everything. the school is not going to be for everyone so make sure you continue to do some research on your own to find out if it would be a good fit for you .the academy admissions website has some fantastic information not only about cadet life but also how you can get started on the application itself .